Something extremely freaky happened at the National Corvette Museum in the early morning hours of February 12, 2014. The ground opened up beneath the Skydome display area and swallowed eight very special Corvettes. The sinkhole was 40 feet across and 30 feet deep.

Many people do not realize that Corvettes are made in Bowling Green, Kentucky. The renowned National Corvette Museum is just down the road from the assembly plant. The 115,000 square foot facility contains over 80 rare and classic Corvettes, many of them on loan from General Motors and private owners.

The video is a mini-documentary showing the size of the hole and efforts to retrieve the cars. Some had minor damage and started immediately, others sustained serious damage.

General Motors has pledged to restore each Corvette to its former pristine condition.  Mark Reuss, executive vice president of General Motors Global Product Development. said, “The vehicles at the National Corvette Museum are some of the most significant in automotive history. There can only be one 1-millionth Corvette ever built. We want to ensure as many of the damaged cars are restored as possible so fans from around the world can enjoy them when the Museum reopens.”  Ed Welburn, vice president of GM Global Design will manage the restoration. 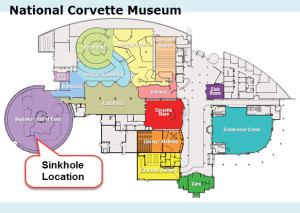 The sinkhole only affected one building and the National Corvette Museum remains open. Officials said a large number of people have expressed a desire to see the effects of the pileup firsthand, so the damaged cars will be on display until they’re shipped to Michigan.

Sinkholes are not uncommon in Kentucky. Dr. Jason Polk, Assistant Professor of Geography and Geology at Western Kentucky University said, “This area of the country is an iconic example of a landscape where sinkholes occur. In recent years, our knowledge and understanding, along with with the technology and science to better study these landforms, has advanced significantly. Living, visiting, or vacationing in an area like Bowling Green, Kentucky is as safe as anywhere else in the country.”

The sinkhole is being examined by engineers. Wendell Strode, the executive director of the museum, says it will be filled and the Skydome will be reopened when the job is complete.