“Hot Rod Lincoln” is a Good Ol’ Boy Rockabilly car song if there ever was one. And the guy who wrote the song in 1955, Charlie Ryan, was just that kind of guy.

Ryan had a 1948 Lincoln, and he chopped off a couple of feet from the tail end so a Model A body would fit on the frame. It was a real stealth street rod. Of course, it was what was under the hood that made the real difference. It was in 1948 Lincoln 12-cylinder motor.

“Hot Rod Lincoln” was a “One Up” Song

“Hot Rod Lincoln” was a diss of a 1951 song by Arlie Shibley, entitled “Hot Rod Road Race.” In that song street racers in a new Ford and Mercury roared through the streets of San Pedro, California. In the song, both cars were beaten by some kid in a souped-up Model A hot rod. Ryan wrote, “Hot Rod Lincoln” to take credit, in a fun way, for being the mysterious hotrodder who won the race.

How did he turn that thrilling scenario into real life? He built a car that would make today’s street racers proud. He could bet pink slips anywhere and come out on top because his Lincoln Zephyr engine had a four-barrel carb and the drive train was equipped with a 4:11 gear ratio rear-end. And, important at that time, his Lincoln running gear had overdrive. 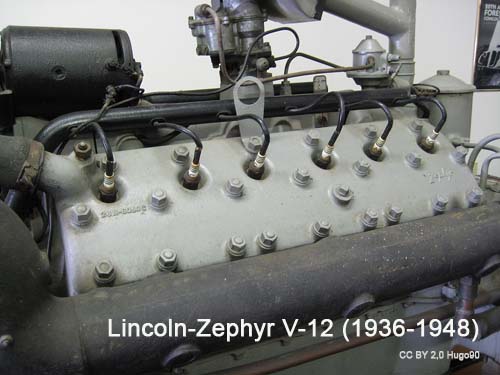 Ryan actually raced his hot rod Lincoln against his friend’s Cadillac up the old Spiral Highway in Lewiston. Idaho. However, because all cool car songs seem to be California-based, the race, as recounted by Ryan, started in San Pedro (like the Shibley song) and went up “the Grapevine,” the pass highway between the Los Angeles basin and the high desert.

Ryan had his race, but he was smart enough to change the setting for a wider appeal.

Ryan recorded two versions of the song. The first was in 1955 on Souvenir Records as Charley Ryan.

Interestingly, the B side of that 45 RPM single was, “Hank Williams Goodbye.” Hank Williams was a favorite of just about everyone back then and he remains a favorite of many today. Williams died at age 30 in the back of the 1952 Cadillac convertible while on a concert tour. He died from an archaic speedball of alcohol, Chloral hydrate he ingested himself. But the fatal dose was from a B12 injection administered by a doctor That injection was laced with morphine. By the way, you can see a photo of the Williams death car here.

There is no question that Ryan felt a real connection with Hank Williams and we see that in the first pressing of “Hot Rod Lincoln.” Ryan recorded the second version with a different backing band in 1959 and a different B side.

In 1960, Johnny Bond released a cover of “Hot Rod Lincoln.” This is the version that most remember if they grew up with the muscle cars of the 1960s. The main difference is that Bond changed the lyrics from Ryan’s Lincoln Zephyr V-12 to a V-8. By the early 1960s, the V-12 was considered too heavy and lacking in horsepower to be a good hot rod choice.

There might be some confusion in the minds of some about the version of “Hot Rod Lincoln” they know and love. That’s because country rock band Commander Cody and his Lost Planet Airmen cut a cover in 1971. That version made number 69 of Billboard’s Top 100 Singles of 1972. There have been other covers of the song by other artists over the years.

Here’s the 1971 version by Commander Cody.