Tim “Tool Man” Taylor was the host of an obscure Michigan cable TV show called “Tool Time.” Of course, that show was inside a vastly more popular show called “Home Improvement” starring Tim Allen.  The show aired on ABC from 1991 to 1999 and was one of the highest rated shows of that decade.

Tim Allen’s character was a know-it-all home improvement expert. However, he would have probably died in a work-related accident the first season if not for his sidekick, Al Borland (played by Richard Karn) who was actually handy and saved Tim Taylor from all kinds of mayhem.

Tim Taylor was also known for having an unfinished project car in his TV show garage. He worked on these cars in an attempt to bond with his sons, even though his wife was not always supportive of his car building efforts. It appeared that Tool Man Tim was as inept in the garage as he was on his home improvement projects.

Fast forward to today. It seems the real-life Tim has his own eclectic car collection. Some might call it a weird collection. Most are cars he liked as a kid and bought when he got rich off his TV show and movies. Other cars were featured on his show, and he put them into his collection when the show ended.  Some cars in the collection are rather quirky. They are probably there because of emotional attachment or for tax reasons. 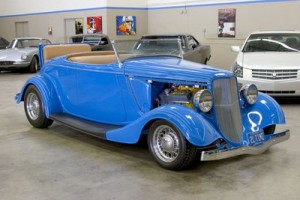 You will probably notice an improperly labeled car in this video. That’s not a 1933 Ford, it’s a 1946 Ford convertible. According to the label, it has a 350 Chevy engine, but Allen says in the video that it is a Flathead. The convertible was featured on “Tool Time” during the 1999 season.

Allen does own a blue 1933 Ford Roadster with a Chevy 350, but it is not shown in the video. He calls this car the “Blue Goose.”